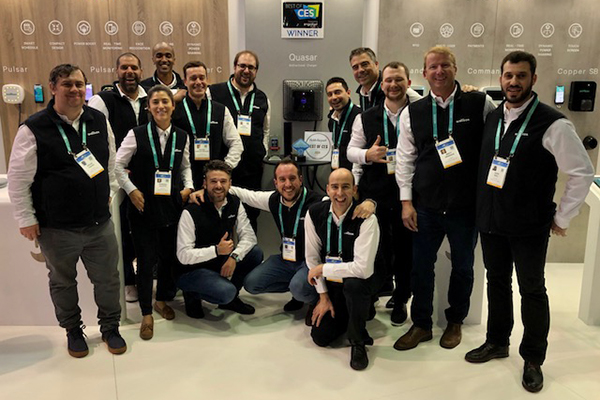 Barcelona, 10 January 2020 – Wallbox wins four awards in its first participation at the Consumer Electronics Show (CES) in Las Vegas, the largest consumer technology event in the world. Among them, the main award was presented by Engadget together with the Consumer Technology Association (CTA), owner and organizer of CES.

All four awards recognize the Quasar charger as one of the most innovative products of the entire event, being the first two-way DC charger in the world designed for the home. The first prize was awarded by the US publication Electrek, which focuses on the electric mobility sector. In the second case, it was the American publication Newsweek, which presented this award for the first time at the CES, recognizing Wallbox as the best product among those presented at the fair. The third prize was offered by Robb Report, an American publication specializing in lifestyle and luxury goods. Finally, Wallbox received the award for Best Transportation Technology from the American publication Engadget, one of the leading digital publishers in the technology and innovation sector.

In 2020 Wallbox starts its expansion to the North American market, participating for the first time in CES, where the Spanish company exhibited its range of residential and commercial chargers. The first two products that will be available in North America are the residential chargers Pulsar Plus and the bidirectional charger Quasar.

Wallbox’s CEO and co-founder Enric Asunción comments: “We are honored by the awards that our Quasar charger received at CES this year. We have been recognized by industry experts competing against the best and biggest players in the automotive sector worldwide. We see this as a strong signal that our commitment to sustainable electric mobility, and the development of products that will help us to become independent from fossil fuels, is right.”

CTO and co-founder of the company, Eduard Castañeda, adds: “Both our chargers as well as the MyWallbox platform are carefully designed to make charging electric vehicles simple for consumers so that everyone can take full advantage of the possibilities that electric vehicles offer to people, businesses and cities. But with Quasar we go even further. Two-way charging will allow EV batteries to be used to power homes, offices and even return energy to the grid in times of high demand. Until the launch of Quasar, this possibility was more theoretical than practical, since two-way chargers have been very large and expensive.”

About CES and the Engadget Best of CES Awards

Since 1967, the Consumer Electronics Show (CES) has brought together technology companies from around the world, from startups to large multinationals in all sectors. It is here that many of the most innovative products are presented to the world for the first time.

Quasar is the world’s first two-way DC charger designed for the home. Previously this bidirectional technology was only available at three times the price in very large formats in pilot projects used in fleet depots. Wallbox’s team of engineers found an innovative way to make this technology available for consumers in a sleek and compact size with high efficiency and at a significantly lower price.

Quasar works with a mobile application (iOS and Android) and an energy management platform that makes it easy for the user to manage. It works in conjunction with the electrical grid and the house’s energy management system (thermostat, lights, etc.). Quasar allows to easily set the parameters of when the user wants the battery of his electric vehicle to be used.