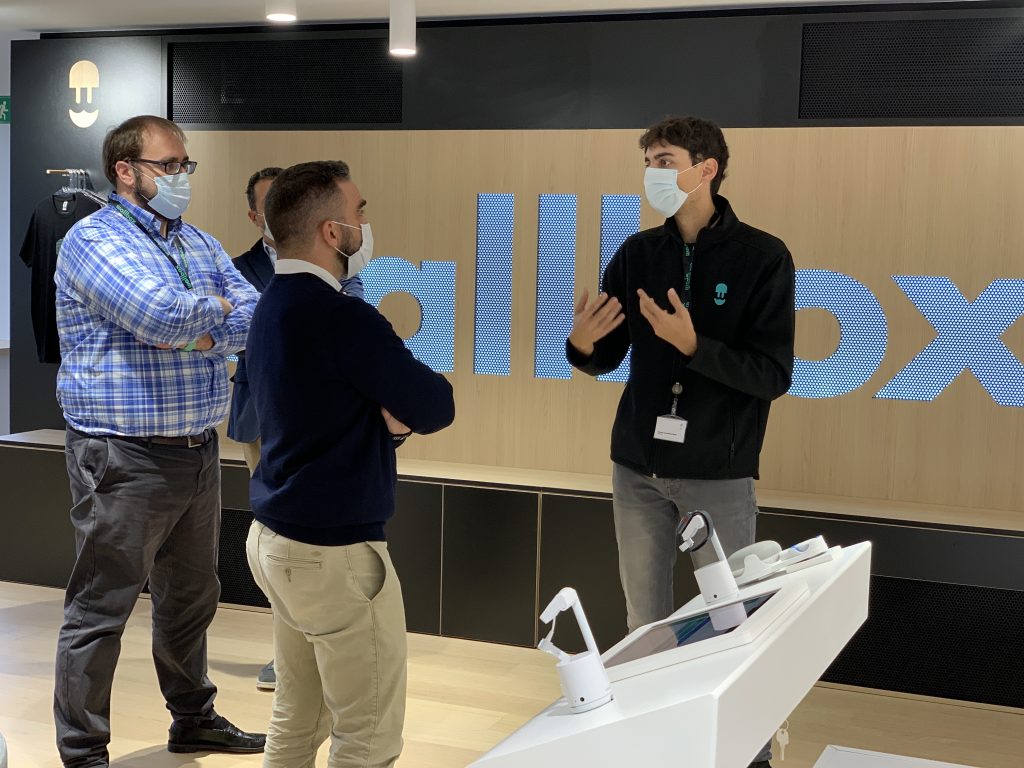 The High Commissioner highlighted the impact that the company has generated in the entrepreneurial ecosystem not only at the national level but also internationally, with technological solutions that place Spain at the forefront of innovation.

Barcelona, ​​November 13, 2020. Wallbox has received in its headquarters in Barcelona the visit from Francisco Polo, the High Commissioner of España Nación Emprendedora, a program created by the Spanish government to boost the country’s  entrepreneurial ecosystem and foster  technology innovation in Spain.

During his visit, Francisco Polo was interested in the technological development of the company, as well as in the entrepreneurial ecosystem in which it is inserted with impact both nationally and internationally. Currently Wallbox has production lines in Barcelona for its residential and semi-public chargers to supply the European market and soon the North American market, where Wallbox will start to distribute its chargers next month. In China, the company manufactures its residential charges exclusively for that market.

“Wallbox has managed to generate a great impact on the entrepreneurial ecosystem, not only in our country but also internationally; with technological solutions that place Spain at the forefront of innovation. Its trajectory is an example of what our country needs to become the Entrepreneurial Nation that we want to be ”, said Francisco Polo, High Commissioner for España Nación Emprendedora.

Mr. Polo also visited one of Wallbox’s R&D laboratories, where the company develops concepts, prototypes and performs tests of new products and from which, about a month ago, the functional prototype of the company’s first public fast charger was first presented to the market. The product, called Supernova, offers technological and cost advantages compared to current options on the market. To produce it, Wallbox has announced an investment of 5 million euros in the next 2 years to set up a new factory in Spain. In 2021 the company expects the Supernova to correspond to 30% of its turnover.

One of the greatest strengths of Wallbox is that it develops its products with its own technology, achieving optimal levels of efficiency in its development times. The company has a continuous investment of 50% of its budget in R&D and also has a complete structure of laboratories, equipment, and production plants.

“We continue to walk firmly towards our goal of becoming the European hub for accelerating electromobility and managing renewable energy in the coming years. We understand that we are on the right track to be able to develop our own and patented technology in Spain that is having great international recognition and generating great interest in the more than 50 markets where we operate ”, said Enric Asunción, Co-founder and Chief Executive Officer.

Regarding the immediate future and the company’s growth plans for the next 2 years, the development of new public and private recharging systems is expected, as well as technologies related to sustainable energy management. These projects will also involve the expansion of production lines, R&D centers, the opening of a new factory, as well as the creation of another 600 direct jobs in the next 2 years.

Wallbox is a leading energy management company and manufacturer of smart charging solutions for electric vehicles. Combining cutting-edge technology with exceptional design, Wallbox creates a smart ecosystem that improves how energy is managed, used and stored. Created in 2015 and based in Barcelona, Wallbox’s mission is to facilitate the move towards electric vehicles today for a more sustainable use of energy tomorrow. Envisioning a fossil fuel-free world, Wallbox technology enables people to create, use and share renewable energy in ways they never thought possible. Wallbox currently sells its chargers to more than 40 countries and has 250 staff in offices throughout Europe, Asia and America, as well as two factories. Wallbox currently has four types of chargers available, including Quasar, the first bidirectional charger for home use, which won a major award at the Consumer Electronics Show (CES), the world’s leading technology trade show. In the first half of 2020, Wallbox completed its series A investment round, closing with a total of €23 million.

business management e-mobility Electric Vehicles ev EV Charging Stations EVs Incentives Innovation italy ev grant italy ev grants italy ev incentives italy ev subsidies italy ev subsidy public charging Supernova
We use cookies to ensure that we give you the best experience on our website. If you continue to use this site we will assume that you are happy with it.Ok